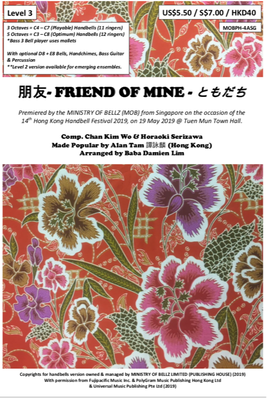 Synopsis:
This handbell work was premiered by the MOB on the occasion of the 14th Hong Kong Handbell Festival 2019 on 19 May 2019, at the invitation of the Handbell Association of Hong Kong. The team received a total of 6 (and probably more curtain calls), with an encore & pop concert-style interaction & engagement with the audience.

A popular solo turned community sing-a -long tune of the 90s, which was popularised by Hong Kong pop singer/actor ALAN TAM. This song was widely sun throughout Asia at its time, because of its lyrics & melodical phrases. The song had the ability to arouse the emotions o the people, to encourage understanding ,empathy, cooperation & most importantly, PEACE, especially in times of uncertainties during the cold war & tensions in the middle east & variouse parts of the world, including the Falklands War & in later years, the 1st Gulf War. One could say this song was Asia's answer to We Are The World, something to bring mankind together, to remind us, that we are FRIENDS!!!

This handbell/handchime version, arranged by Singaporean percussion artiste/handbell director, Damien Lim, may be performed solely on handbells or with option handchimes, and with/without percussion & bass guitar. Although its scored for 3 or 5 octaves of bells mixed with chimes, a bell choir may still perform this work with under 10-11 ringers, since the bass bells (C5 & below) may be managed by fewer ringers using the mallets on bells. This is a highly melodical piece, which promises to be a familiar hit, turned hip thumping & foot tapping for your ringers & audiences.

ENGLISH LYRICS available, on top of the CANTONESE language. 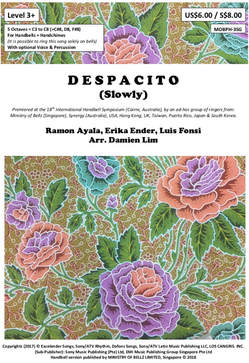 Synopsis:
With 5.3 billion views, making it the most watched video clip ever on youtube. DESPACITO is a song by Puerto Rican singer Luis Fonsi, featuring Puerto Rican rapper Daddy Yankee. On January 12, 2017, Universal Music Latin released "Despacito" and its music video, which shows both artists performing the song in La Perla neighborhood of Old San Juan, Puerto Rico and the local bar La Factoría. The song was written by Fonsi, Erika Ender, and Daddy Yankee, and was produced by Mauricio Rengifo and Andrés Torres. A remix version featuring Canadian singer Justin Bieber was released on April 17, 2017, which helped to improve the song's chart performance in numerous countries, including various number-one positions. "Despacito" has been widely credited by several music journalists as being instrumental in popularizing Spanish-language pop music in the mainstream market again. (Reference from Wikipedia)

This handbell/handchime version, arranged by Singaporean percussion artiste/handbell director, Damien Lim, may be performed solely on handbells, and with/without percussion. Although its scored for 5 octaves of bells mixed with chimes, a bell choir may still perform this work with under 10-11 ringers, since the bass bells (C5 & below) may be managed by fewer ringers using the mallets on bells. This is a highly rhythmic piece, which promises to be a familiar hit, turned hip thumping & foot tapping for your ringers & audiences. 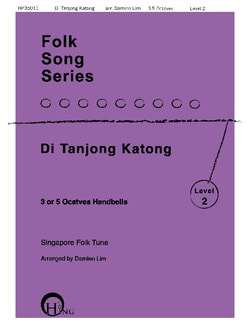 Synopsis:
When one lands in Singapore at the famous Changi International Airport, you will drive past the KATONG area, on your 17 minutes journey towards the city. "Tanjong" means beach / seaside and "Katong" is the name of an extinct species of turtle. Tanjong Katong is an area rich in the PERANAKAN CULTURE and an enclave for food from all over the world. A delightful area for all a multi-sensorial experience indeed. SMELL & TASTE the food, HEAR the sounds of multi-languages spoken here, SEE the colours and designs of the Peranakan housing & finally TOUCH the items in this area, including its goods, buildings and artifects.

This score is written for both intermediate ensembles with either lack of instrumentation or manpower. The 3 octave version will produce an outcome that is rather lyrical and soothing to the ears and mind. The 5 octave version gives an "oomph" to the music since the bass bells adds in a groovy and rhythmical spirit to the song. Enjoy both versions, since it produces 2 different outcomes. Not many scores allows you to achieve this outcome. 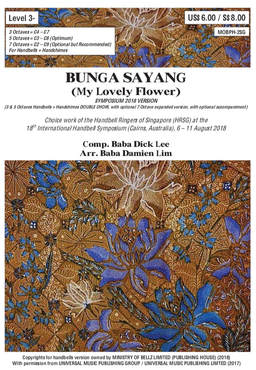 Synopsis:
This work is commissioned as the handbell work to represent Singapore & the Handbell Ringers of Singapore (HRSG) Guild at the 18th International Handbell Symposium in Cairns, Australia (6 - 11 August 2018).

This song, written for handbells, telling the story of Singapore, from its humble beginnings, as a sleepy, swampy, seaside kampong (village), when the British arrived in 1819. Progress took place and they brought trade to Singapore. Immigrants started to come to make Singapore their home. Only to be interrupted by the WW2 in 1942-1945. After the war, progress took speed and Singapore developed exponentially under the foresighted leadership of PM Lee Kuan Yew. The faster paced 2nd half of the music describes development in the areas of trade, education, Defence, Health, environment, housing and foreign relations. And upon establishing multi- international relations with various countries, and Singapore soon became a first world nation, where its people live in harmony, regardless of language, race or religion. Singapore today, is a city-state-country, a nation described often as a melting pot of cultures, where people live together in peace and in harmony. True to the description of BUNGA SAYANG = MY LOVELY FLOWER. Singapore has bloomed. 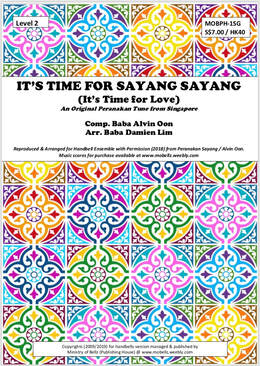 Synopsis:
'It's Time for Sayang Sayang' was written and composed by Baba Alvin Oon in 2003 as a jingle for a radio commercial for CK Tangs (a Singapore department store) Christmas promotion 'A Very Peranakan Christmas'. The song was first heard on Singapore's radio stations and also as the in-store theme song during the Yuletide season.

​The song's theme is about finding time in our hectic lives to love and care (sayang sayang) for family and friends and to appreciate life around us as we smell the roses along our journey.

The full version of the song was first performed in the Peranakan musical 'Bibiks Go Broadway' also in 2003, produced by ShowFEST (a former event production company) and staged at the University Cultural Centre. The stage performance version was sung by Baba Ivan Heng. As part of the theatre production, a soundtrack CD album 'The Best of Peranakan Tunes' was produced and the song, sung by the composer himself, was featured as one of the tracks.

In 2005, the song became the unofficial theme song for the Singapore Pavilion at World Expo 2005 Aichi, Japan. The song was used as part of the daily Singapore show and it became popular with the many Japanese visitors who started singing the song enthusiastically breaking the language barrier between performers and audience.

In 2008, Singapore's TV station Mediacorp produced a sitcom series called 'Sayang Sayang' and the song, sung by Baba John Lee, was used as its theme song and then again for its second season in 2009. The tune was also used as a Mandarin song and performed by Taiwanese artiste Hebei from the popular group S.H.E. and featured in her solo album.

The song was also produced in different music arrangements in music albums by The Main Wayang Company in 2008 (It's Time For Sayang Sayang) and 2011 (Baba Nyonya Newstalgia).

This handbell version (arranged by Baba Damien Lim) was commissioned as the handbell work for the 2009 Asia Handbell Festival in Singapore, which was unfortunately called off due to the emergence of the H1N1 flu virus.

Music arranged for handbells with permission from Baba Alvin Oon (2009)