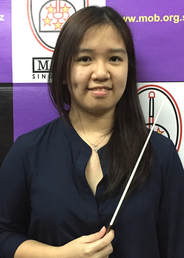 STEPHY, a graduate from Temasek Junior College (TJC) Music Elective Program & the Integrated Program, and has also graduated from the Singapore Management University with a degree in Information Systems Management and Sociology. She has also completed her Specialist Diploma in Arts Education with the National Institute of Educational (International) in collaboration with the National Arts Council recently.

As head librarian of the Ministry of Bellz (MOB), she performed with the MOB @ Kuala Lumpur (2009) & Melaka (2010). In June 2010, she achieved the Level 5 with Merit in Handbell Performance, certified by the London College of Music. She was also the Assistant Stage Manager at the Asia Handbell Festival in Melaka (Malaysia). She is an instructor under the Ministry of Education (Singapore) Arts and Music Instructor Scheme.

In 2012, Stephy was appointed to be Secretary of the Handbell Ringers of Singapore. As part of the Singapore contingency, she has attended the International Handbell Symposium in Jeju (2014) and Vancouver (2016). In 2013, she was also appointed to be the Young Associate Conductor of the MOB and has graduated to be the Conductor of the Ministry of Bellz this year. She is proud to have conducted her first mass ringing ensemble at the event, Afternoon with the Bellz V. The mass ringing ensemble is also recognized to be the Singapore Book of Records Largest Handbell Ensemble up till 2016.

In 2018, Stephy was appointed to be the first Massed Ringing Conductor to represent the Handbell Ringers of Singapore. She conducted ‘Bunga Sayang’, arranged by her teacher - Damien Lim, to almost 200 ringers from America, Japan, Great Britain, Korea, Hong Kong, Canada, Australasia and Singapore at the 18th International Handbell Symposium in Cairns.

Under the guidance of Mr Tan Kian Wee, she has achieved her grade 8 certificate in organ by the Trinity College of Music. She has also performed in numerous demonstrations on the Yamaha electone EL-900 & Stagea at various locations in Singapore. In the musical theatre, she performed in Siapa Baba – A Peranakan Wayang, as a bass keyboardist.
Vacant
MOB Assistant Conductor

(New) This 2-5 years tenure, takes the assistant conductor (usually an adult with a certain level of music qualifications)  forward in training and priority given to conduct the MOB in performances.

(New) This 2-5 years tenure, takes the associate conductor (usually an adult with a certain level of music qualifications)  forward in training and priority given to conduct the MOB in performances. 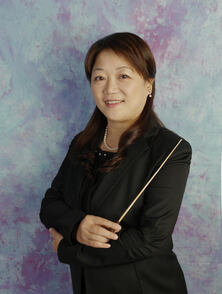 Emily Li obtained her Bachelor and Master Degree in music from Hong Kong Baptist University (HKBU) and Chinese University of Hong Kong, major in composition. She was a lecturer and the handbell director in the Music Department of HKBU from 1997-2004. At present, she is the Artistic Director of Hong Kong Handbell Academy, Hong Kong Youth Handbell Ensemble (HKYHE), Bell Allure and The Clappers; Founder and Music Director of Gloves Handbell and Chairperson of Handbell Association of Hong Kong (HAHK).

Emily started ringing handbells in 1986 and has since developed an obsession with this instrument. She learnt handbell solo from renowned soloists Christine Anderson, Nancy Jessup and Nancy Hascall, and has completed the Graduate Program in Handbells at Concordia University, Wisconsin. She had studied with handbell masters Kay Cook, William Payn, David Davidson and Arnold Sherman in handbell performance, conducting and composition. She is listed in the Who’s Who in Handbells for her outstanding achievement in handbells performance and education.

Having the mission to promote handbell ringing in Hong Kong, Emily resigned from her lecturer’s post at HKBU in 2004 and founded the Hong Kong Handbell Academy, which aims to provide handbell resources and professional training for the general public. She founded HKYHE in 2005 and started training handbell conductors and performers of the young generation. In 2006, she founded Handbell Association of Hong Kong and organized the annual Hong Kong Handbell Festival. Under her leadership, the Association has joined the International Handbell Committee in 2010 and made Hong Kong the host city of the International Handbell Symposium in 2020.

Emily actively participates in overseas handbell festivals to work and perform with great handbell masters. She has led her choirs to ring in various public performances and recordings for TVs, radios and international conferences, where their performances were highly appreciated. These include the biennial International Handbell Symposium, Asian Youth Arts Festival in Kagoshima, and concerts in Taiwan, Singapore, New York and Phoenix City. She also served as the clinician at the National Seminar in Cincinnati, USA and the massed ring conductor at the 15th International Handbell Symposium in Liverpool in 2012.

As a handbell soloist, Emily has performed handbell solo in Hong Kong, China, Singapore and the United States. In 2012, Emily collaborated with the composition department of the Hong Kong Academy for Performing Arts and premiered 7 original handbell solo pieces, making a step forward to promote handbell ringing in the music community.

* The Principal Guest Conductor's role, takes the conductor to come to Singapore once every 3-5 years to work with the team on a regular basis.

(New) This  10 years tenure, takes the associate conductor (usually an adult with a certain level of music qualifications)  to come to Singapore once every 3-5 years to work with the team on a regular basis.

VALERIE LEE
Dip (Psych), Dip (Early Childhood Studies)​
MOB Young Associate Conductor
​
Valerie was introduced to handbells at a very young age in church, and began her journey in handbells at Paya Lebar Methodist Girls’ School (Primary) in 2007. She performed with the PLMGS (Primary) ringers at the 13th International Handbell Symposium held in Orlando, Florida (USA) in 2008, and achieved a Gold Award at the 2010 Singapore Youth Festival (SYF) under Mr Damien Lim.

She also performed with the PLMGS (Secondary) ringers under Ms Goh Lee Lee, where the team attained the Certificate of Distinction at the SYF 2013 Arts Presentation. It was in the same year that Valerie decided to further cultivate her love for ringing by joining the Ministry of Bellz (MOB), where she was given opportunities to learn the art of conducting in 2017 and 2021.

Valerie’s dedication to handbells comes from her lifelong love for music and the performing arts. Beyond handbells, she has been involved in a number of different performing arts groups: serving in her church’s choir since the age of 6, learning ballet in primary school, and being an active member of both the Band and the Chorale CCAs in Temasek Polytechnic, where she was given the opportunity to serve in the Main Committee of Chorale as Quartermistress and Assistant Training Head in the 2018-2019 Academic Year. 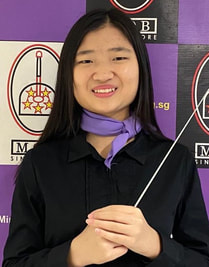 Tan SHIN LU was first introduced by her teacher to handbells in Fairfield Methodist School (Primary) in 2012. She participated in the Singapore Youth Festival (SYF) Arts Presentation 2014 under the baton of her then-instructor Mr Damien Lim. THE FMS(P) handbell team achieved their 3rd consecutive SYF Distinction Award.

Upon graduating from her Primary School, she joined the Ministry of Bellz (MOB) in 2015, where she was able to experience countless performance and learning opportunities to expand her knowledge in the art of English Handbell Ringing. In 2021, together with 9 other MOBsters, she completed an online-hybrid Handbell Conductor’s training under John Hooper (Canada) and the MOB Conductors in Singapore.

Apart from handbells, Shin Lu also has a strong passion in piano performance and music education. It all began at the age of 3 years old, when she joined a music play group for children. She has been playing the piano for well over 15 years, since 5 years old.

Shin Lu’s passion in music making and the performing arts, influenced her decision on taking up the role as a Handbell Instructor with Lim Yong Productions in 2020. She was appointed MOB’s Young Associate Conductor-designate in June 2021. 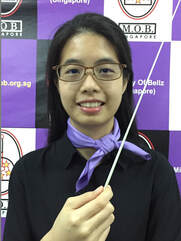 Ke Hui first rang handbells back in 2004 with the Cedar Handbell Ensemble. As a ringer, she participated in the Singapore Youth Festival (SYF) Central Judging 2007 under the baton of Mrs Angela Aw and the team attained the Silver Award.

Passionate to learn about different kinds of art, Ke Hui went on to join different performing arts group throughout her school years. She picked up the cello in Temasek Junior College Chinese Orchestra and represented the college at the SYF Central Judging 2009, at which the orchestra clinched the prestigious Gold (with Honours) Award. She also performed in numerous public concerts, including Musique pour TouJours. In her university days, she joined the NTU piano ensemble and exchanged knowledge with like-minded pianists. She performed in NTU Piano Ensemble’s annual concert, Eleganza, in 2011 and 2014. In her personal time, Ke Hui took piano lessons and has achieved the Licentiate of Trinity College London (LTCL) in Piano Recital with Distinction.

After graduating from university and joining the workforce, Ke Hui wanted the opportunity to continue honing her art form. In 2016, she joined the Ministry of Bellz (MOB) to continue her passion in handbell ringing. Under the tutelage of Mr Damien Lim, she picked up conducting in 2017 and conducted her first piece in MOB-11: Showtime.
Click to RINGERS